Jack, the jacana, awoke at 5 a.m. He was already late to meet Jacqueline. Even so, he stopped by to say, “Good morning!” to Ellwood, the elephant; who was having his morning drink of water at the Chobe River. He and Ellwood had been chummy for a while now and Ellwood always listened to Jack’s complaints about Jacqueline's noncommittal attitude.

Then Jack flew downriver to the partially submerged phragmite reeds where he and Jacqueline often met. Jacqueline's voice broke the Botswana morning mist,“You’re late,” she squawked.
“Yes, but we can still enjoy the morning,” suggested Jack.
“We’ll see,” she said over her shoulder, trotting away from him to another lily pad.

It was a slightly overcast morning on the Chobe River. The lilies overlapped each other on the water, like multiple decks of playing cards tumbling down to the floor. Amid the field of green pads, some were overturned, exposing bright lime veins weaving through the rhubarb colored underbelly. Despite the clouds, Jack and Jacqueline Jacana’s blue frontal shields shown brightly.

Jack liked to call Jacqueline “Jackie.” It implied an intimacy that he encouraged. His real name was “iThandaluzibo,” but she called him “Jack.” He imagined that when she called him “Jack” it was a sign of affection and familiarity. He liked that. She often seemed indifferent to him, but today she surprised him by saying, “I think the rainy season would be the best for starting a family. “

“I like the sound of that!” Jack agreed encouragingly.

“In fact,” Jack continued, “I would enjoy fetching insects for the brood. I could keep an eye on the eggs as well.” He had not yet incubated an egg or picked up and carried a chick beneath his wings, but he felt sure he could do it.

“Good,” repeated Jackie, thinking she might have some plans that included mating with some additional males, but before she was able to follow this train of thought she saw Jack careening sideways and called to him, “Watch out Jack!”

But it was too late. As they had been chatting about family plans, Jack had carelessly stepped on a lily that could not support his weight. He jump to another pad, flying a short distance with water trickling off his long toes.

“Glad no one saw that,” he thought to himself. Then he looked up and saw Allen Gallinule's red beak. Allen was working on getting something out of the water and hadn’t noticed Jack’s misstep. Jackie's eyes were on Allen as she scurried across the lillypad to Jack, “What’s he doing?” she asked.
“No idea,” Jack answered. They watched for a while, moving closer.

Allen was busy tussling with whatever was in the river. He finally pulled an olive green seedpod, about the size of a small apple, out of the water and onto a floating pad. It was an unripe seed head of a water lily.

Allen paused for a moment as Jack and Jackie drew near.

He perched upon the seedpod and warned them, “Pruk...keck…..don’t think you’re getting any of this today!”
But Allen underestimated Jackie's tenacity. “Well, we will see about that,” Jackie whispered to Jack hopping across the floating leaves of the water lilies until she was on the other side of Allen.

Allen redoubled his efforts, his short red bill attacking the seed pod like a jackhammer as the jacanas surrounded him. He paused only long enough to take a few threatening steps, first towards Jackie and then towards Jack. Lily pads quivered as the jacanas backed away. Jackie, unperturbed, caught sight of some insect larva and had a snack. Allen, for now, had defended his capture.

As if the jacanas weren’t giving him enough trouble, Allen also had to worry about overhead threats. His eyes occasionally glanced upward for hawks, falcons, or eagles that might like to make a meal of him. Finally, Allen broke through the olive green skin of the pod to the yellow seeds beneath. He ate greedily; as quickly as he could with the constant interruption of the jacanas trying to share his meal. Pecking the pod, he unconsciously spewed the fruits of his efforts. Jack and Jackie temporarily satisfied themselves picking up seeds scattered by Allen on nearby lily pads.

An acquaintance of theirs named Grootlangtoon, Jackie called him “Jax”, arrived on the scene. Jax thought he would have some yellow seeds for breakfast too, but Allen quickly charged at him. Jax pretended to wander off uninterested as Jackie walked towards the seed pod. Being harassed by three jacanas was even more upsetting to Allen.

“Back off!!!” screeched Allen in his sharp nasal voice, “Pruk...keck…..go eat a beetle!” “These tropical waders with the blue heads are a real annoyance,” he thought. Perhaps Allen was full, or perhaps he was exasperated by the jacanas, but he took only two more bites before flying off towards a wall of papyrus and phragmite reed. Jack, Jax, and Jackie all approached what was left of the seed pod.

“What do you boys think you doing?” squawked Jackie, “You heard Allen, BACK OFF!” And with that she put her left foot on the pod poking her head angrily in the direction of the males. Female jacanas are larger than males so Jack and Jax retreated.

“I was just having a look,” said Jax.

Jax hopped away before he took flight, “I will see you in the rainy season Jacqueline, maybe around January.”

Jackie watched him fly away thinking that she would like to lay several clutches of eggs this year and perhaps she and Jax would get together in January. She devoured most of what was left of the seed head.

“You go ahead Jackie, I don’t mind being last,” said Jack. But he wasn't very convincing, even to himself. He thought he might go visit Ellwood, on the southern bank of the Chobe, to see if there was anything to eat there.

Jackie turned her full attention towards the seed pod, not even a boatload of tourists could have distracted her. 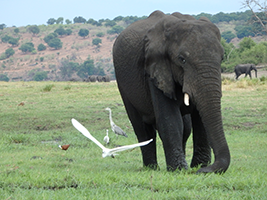 Jack and Ellwood Hanging Out 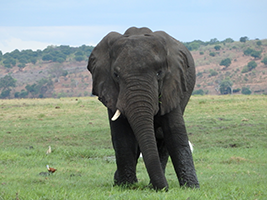 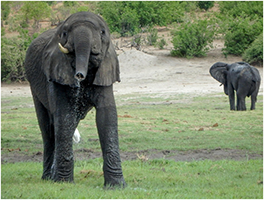 Ellwood moving on with His Day